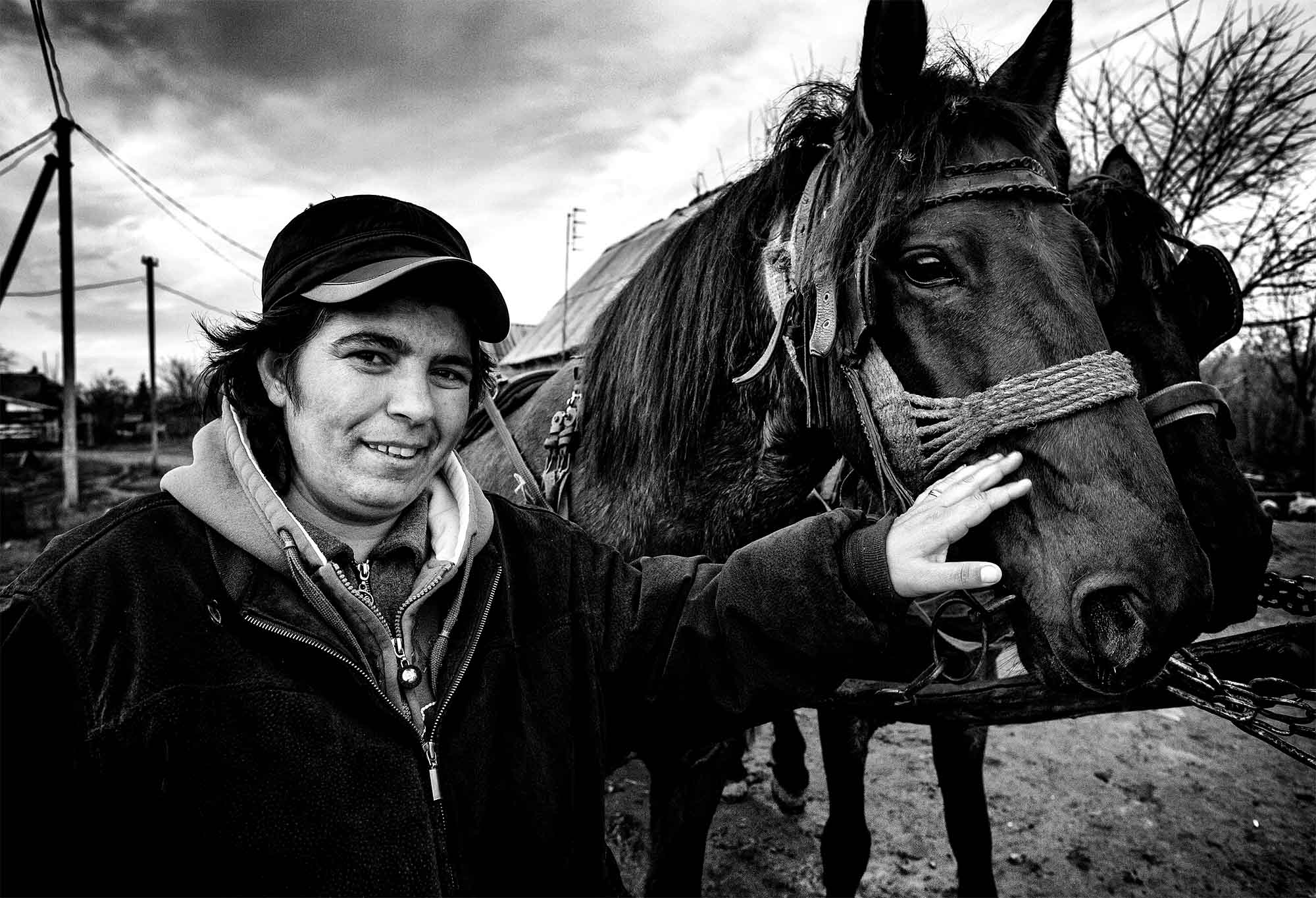 I am walking with the gypsy baroness through the blurred streets of the Chop camp after the recent rain. Her name is Monica, although according to her passport she is Ilona. Monica is always in a good and fighting mood. People notice us and come out to meet us. She will shake hands with everyone she meets, smile, listen carefully and give a piece of advice. Monica is loved and respected in the camp.

We stop near one of shabby houses, from which Monica is called by an elderly hunchbacked woman. Monica listens attentively to the old woman, takes her arthritic trembling hand and says, “Okay, I’ll help”. She remembers the problems of all the residents of the camp, all the Roma who turn to her for help and advice.

Suddenly a man in a cart with a black horse is coming to meet us. He stops, they greet. Monica comes closer to the horse, begins to stroke his mane and snout, and then whispers something near his guard’s ear, returns to the owner of the animal and asks:

– How’s the horse? Has it recovered yet?

– Yes, it is already strong, it works, – the man answers.

– Do your children go to school? Do not they miss lessons?

The cart passes through a puddle formed after heavy rain. The road is being washed away every time, this is a real problem for the residents of the Roma settlement, because the condition of the road determines whether the children will get to the local school today. One day, a city bus carrying children simply refused to stop because it did not want to “carry dirt.” Then Monica and her fellow villagers collected buckets of this dirt and carried it straight to the office of Mayor Chop, who repeatedly ignored the request to make the road.

One of the most painful issues for Monica is the education of children. She sees education as the only way to break the Roma poverty line.

“At one time, the Roma simply did not get into the general education system from a young age because of their way of life – nomadic movements from place to place did not contribute to school education. It didn’t make sense to send the children to classes, because the Roma understood that in a very short time the camp would move and leave. However, it cannot be said that the Roma did not receive any education at all. It was simply not what we traditionally imagined it to be. Roma traditional education is more like the old rural education, when children learn by watching their parents’ work and eventually acquire enough skills to earn a living in adulthood in the same craft as their parents”, says Monica.

But the authorities ignore the problems in the camp, they deliberately ignore them and close their eyes, because, you see, they are the Roma.

Usually a typical Roma house is a hut crookedly made of clay, metal sheets instead of a roof, and ordinary polyethylene instead of glass in the windows. As a fence, wooden boards of different sizes were found next to each other and found somewhere in a landfill.

Children’s clothes are drying in the yard, and next to them is an unfolded cart, which has just transported building materials for the house. On the street carefree, as if forgetting about all the problems, children run – a large crowd – the elders with very small, all frowning, and behind them the yard dogs happily wagging their tails.

Few of the camp residents receive assistance from the state, here it is obscured: no one but you will solve your problems. That’s why everyone here is used to helping each other and building their own homes, solving water supply issues and other household problems.

– I grew up in this camp, I was raised by my grandmother, whom I loved very much. I am the only one in our family who can read and write in Hungarian and Russian. I regret that I did not go to study further. In the settlement, I know about everyone, who cares about what, who is in trouble, they are my one big family. I am the same as everyone, not rich, I do not chase money, I can enter any house, talk to any official on an equal footing. For as long as I can remember, I have never lacked determination.

Walking around, I ask her how she became a baroness, because the Roma tradition suggests that a woman is always with children, engaged in everyday life.

– Our people trust me, we are all ready to lend a hand to each other, because we feel that we have no one closer to us but ourselves. I love my Roma. We are melodic, singing, cheerful people, although we live in constant poverty. I “bribed” people with this, because I love them sincerely, “laughs Monica.” Everyone knows that they can turn to me under any circumstances. I can go to the Roma police station at 2 a.m., shout at the chief if he does not issue documents and break the law, demand justice when officials are impudent or take us lightly. That’s why people voted for me, because I won’t leave them in trouble. Before me, only men were barons. In Ukraine, I am the only baroness of a Roma settlement.

Today, the Roma in Ukraine are very isolated, thrown into the dustbin of public life. Unfortunately, the distance between communities and Roma settlements is large and this is another obstacle to overcoming artificial segregation. Ordinary people do not try to understand the specific way of life of the Roma, and narrow-mindedness and unsystematic local government, chaotic decision-making only deepens the gap that separates the Roma and other members of society and increases their isolation.

Monica walks confidently down the street and her presence makes the atmosphere more optimistic. People want to know that they are not abandoned, that they have someone to turn to, and that this time they will get justice.

Monica is a leader, a person who can reduce the distance between the Roma community and the rest of society. It is taking the first important steps towards overcoming common stereotypes, liberating the “ghetto” in which the Roma have long been driven.