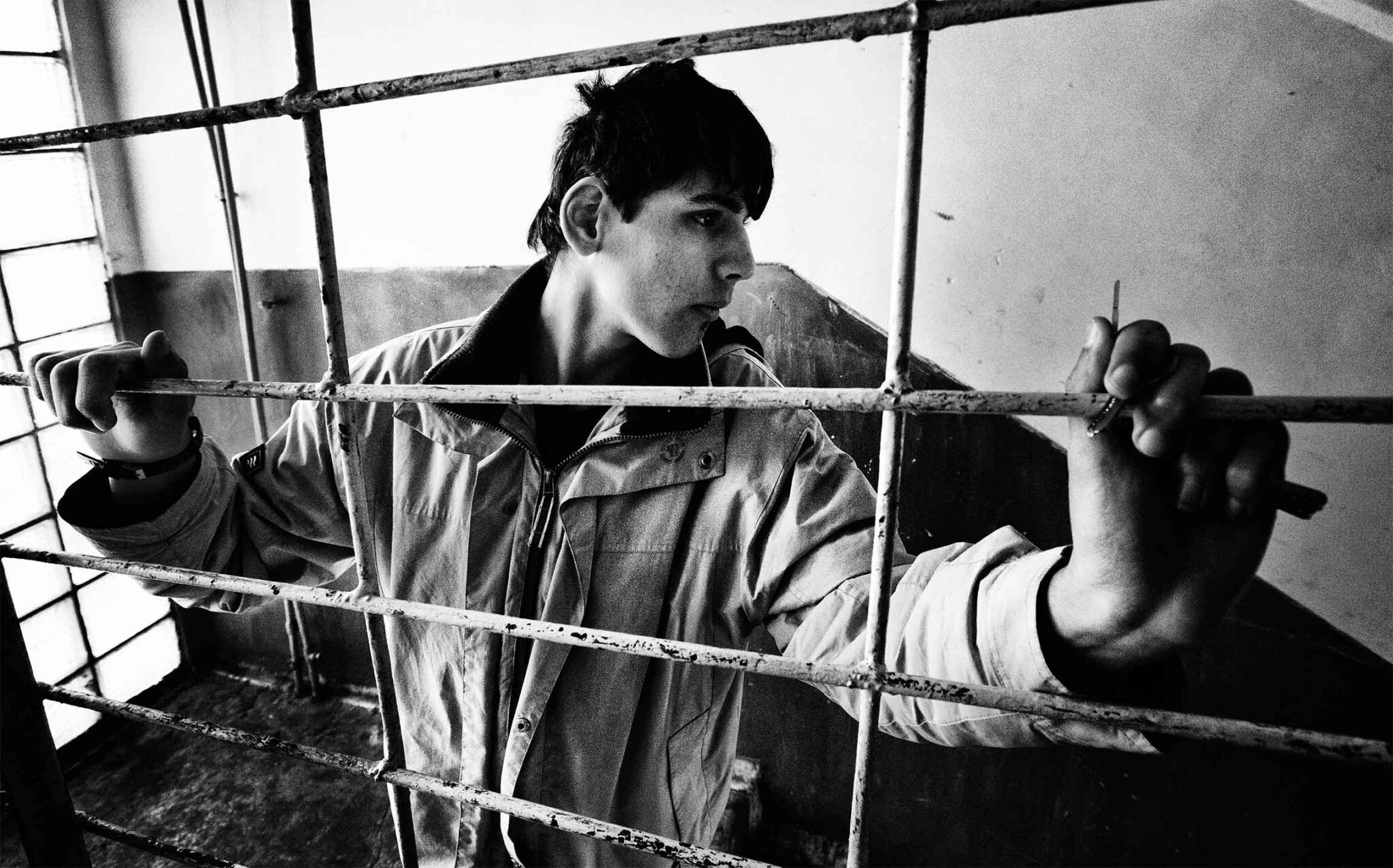 I come into the dirty cold smoky corridor of a hostel, open the door of a small room. Stas - a former ward of the boarding school - lies on the bed, looking at one point. So he can lie for days on end, waiting for someone to come to him. The boy rarely goes out, almost never gets up, practically does not communicate with people, but he is very quiet and a little naively kind guy. So, he spends all his time in his world, as if in a shell.

My gaze takes in a dark, cold, shabby room containing poor belongings: a broken sofa, a table and a chair, improvised curtains from two pieces of old fabric cover a hole in the window that draws out the last heat, a legacy from the boarding school on the floor – a pair of old T-shirts, sweatpants and summer sneakers. Sometimes he goes out into the street in the same clothes and sleeps in it. There is a coffee pot and two cups on the table, but there hasn’t been coffee for a long time, and guests come to Stas rarely.

At sight of me, Stas instantly comes to life and jumps out of bed. He is incredibly happy about my arrival, runs up and with an open look and a wide smile holds out a candy to me – a gesture of friendship.

I don’t even have time to say hello, as he immediately bombards me with dozens of questions: “What do you have in your bag? Who gave you that jacket, mom? What did you have for breakfast? Where are you going for a walk? Do you have a TV at home? Who are your friends? Do you have games on your phone? I want this one too, – for a second Stas falls silent, looks down and very quietly, modestly says: – If you want to adopt me, then I can make the bed, boil potatoes and mop the floor.”

Stas is already 18, he invented this name for himself as a child. According to his passport, he is gypsy, but he has never been in a gypsy camp, and he does not know who the Gypsy. His mother was deprived of parental rights, and almost immediately after birth he was placed in an orphanage, and then transferred to a boarding school – a ruthless relic of the past, a legacy of the Soviet closed cruel system of turning a person, individuality into a herd lacking of initiative, dependent on state assistance.

This system branded Stas with severe mental retardation. His diagnosis is a legalized practice of destroying a person – at the age of three, children are indiscriminately diagnosed with “profound mental retardation”, and a year before adulthood they are changed to its mild form and simply thrown out into society. Without housing, money, any social skills and rehabilitation, elementary skills to adapt and survive on their own. Children get used to their isolation from the outside world and that the nurse is almost the only person who will come and feed them.

They didn’t let us out of the gym for days and turned on the TV. If I tried to get out, they were beating me with fists and kicks. It was extremely boring. I wanted to play outside, but we were not allowed to do it. The teachers closed in the storeroom and drank coffee, no one wanted to work with us, – recalls Stas.

This system gave Stas a certificate, but did not even teach him to read and write. For boarding schools, this is beneficial, because no one needs to be taught, and in which case everything can be easily attributed to the inadequacy of the child. Although in this way he is doomed to a lifelong stay in the system or begging on the street. For all his life, Stas was taught to be inert, helpless, dumb.

Stas does not like to remember about his life in the boarding school, which proceeded according to the same rules: food is brought under the schedule, for disobedience – beating or forced treatment in a mental hospital. When I start asking uncomfortable and painful questions about his past, he gets nervous, puts his finger in his mouth and sucks it.

Most of all I was afraid of being placed in a mental hospital. Other children significantly changed, when they returned from there. But I often disobeyed and was sent there 6 times. When I refused to swallow pills, which always made me feel bad, the orderlies held me and gave them by force,” recalls Stas.

Stas does not know what to do now on the outside, in the “zone of normality”. Before he was pushed out of the boarding school, no one explained what would happen to him next. The outside world and adult responsibilities frighten him. Nobody taught him how to manage money, plan expenses, communicate with people, what work is. Although he looks like an adult, however, his socialization level is about 5 years old. He is afraid to seek help, because he knows that everyone will refuse him.

His only ticket to life is a certificate of incomplete education. But he had to learn to read and write from scratch. A volunteer was training him for a year, but his successes were small: precious time was lost. Boarding schools do not aim to prepare children for independent life, but simply transfer them from one institution to another.

In addition, severe isolation, lack of rehabilitation and the opportunity to acquire elementary social skills deprive the last chance for a prosperous life. Although the boarding school spat him out not into the street, but into a dorm room two by two meters, the world around him remained just as incomprehensible and hostile, and the walls of the room simply became of a different color.

Stas is tall and thin. He sits swaying on the bed, talking softly and smiling. Black oily hair falls right into his eyes, and an attentive look does not miss a single detail. He instantly determines who is “one’s own”, who is “alien”. This instinct is honed flawlessly.

With “his” people Stas is childishly open, in such moments you even forget about his past and wonder how he did not become embittered during his time in the boarding school. He is incredibly talkative and curious, a conversation with him can go on for a long time.

Stas thought about something and fell silent. And then he says, but in a different way, looking in front of him:

– It’s true, it’s lonely here. I would like to take a cat or a small dog from the street and stroke it. We were not allowed to keep them in the boarding school. But there is nothing to feed them yet.

– What do you do in your free time?

– Do you have friends?

– Yes, I had the best friend Andrei. But he remained in the boarding school.

– What do you dream about, what would you like?

– I want to have a mother. And that she cooks pasta for me every day. I also want my ball, like football players, and white sneakers.

When we say goodbye, he suddenly runs out into the corridor and loudly throws after me:

– Will you come again? Just don’t take me to the boarding school. Please!